In 2012 Mr. David Liaudet stumbled on a flea market on a weird image depicting a little girl and part of the iconic modernist chapel Notre Dame du Haut in Ronchamp (France), designed by Le Corbusier. 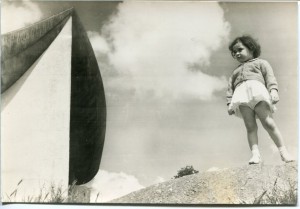 Clearly this picture was not made in the sharp, rigourous style of the famous Lucien Hervé who rather tried to render in a photographic language the “exact poetry” of Le Corbusier’s creations.

Intrigued by his treasure from the flea market, Mr. Liaudet looked for more pictures from the same photographer, a certain Mr. Charles Bueb. That is because Liaudet keeps an architecture blog about postcards displaying modernist buildings. He couldn’t find much, so he launched a public request for additional information about Bueb: “Qui aurait des informations sur ce photographe ?”

This is what followed: The girl on the picture called Liaudet to tell him the story of the life of Charles Bueb, her father who passed away in 2007.  She kept an archive of hundreds of negatives made by her father between 1953 and 1963 on the site of Ronchamp. Then Liaudet called documentary maker Mr. Julien Donada who formed a production team that was allowed access to the archive. The result is a photobook, designed by Mr. Grégoire Romefort, beautifully printed and published in 2015 by niche publisher Facteur Humain. 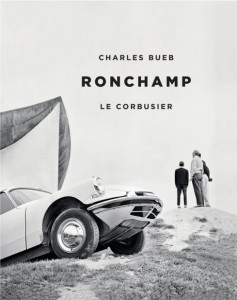 Charles Bueb started his professional career in 1939 as the sports teacher of the children of the potassium miners in Pulversheim. But, he quickly became a public figure as photographer for the journal of the miner’s community (Gazette des Mines), documenting the work, leisure, social and spriritual life of the miners. He was a prolific photographer who was a very much committed to the local life of the region where he was born and where he has lived all his life: the Alsace.

As local photographer, Bueb had also become befriended with some prominent, clerical members of the Artistic Commission that was to supervise the reconstruction of a chapel in the region, fatally destroyed during the liberation in 1945. They had given the commission for the recontruction to a certain Mr. Le Corbusier.

So, in 1953 Bueb set out for the first time to the construction site, at one hour driving from his hometown. 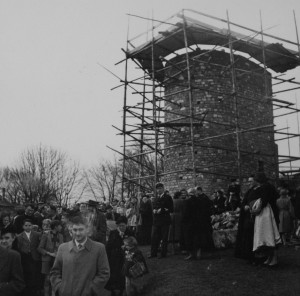 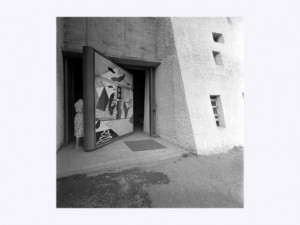 But look at the photographs; Bueb is showing us a radically optimistic even gay face of modern times. The visitors from the nearby villages keep on flocking to the construction works, admiring the new architectural language of the new era: “oh la la, they are doing Picasso here“!

The priests in their raven black coats are not scrutinizing everyone’s conscience. With their sun glasses they are showing off like glamourous movie stars. Aged crones in floral aprones seem to forget the ex voto’s, hidden in their pockets. Men are without exception dressed up with suit and tie. Every one is having a good time! 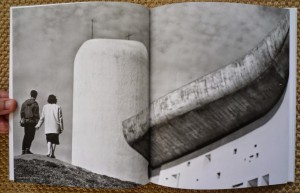 And Bueb is a funny man too. He allows chicken to run in his champ de vision and he also brings another icon of post-war optimistic modernity to the chapel. I am referring to a vehicle, the Citoën DS 19 manifactured in 1955. Indeed its flamboyant yet rigid lines go pefectly in pair with the lines of the chapel. 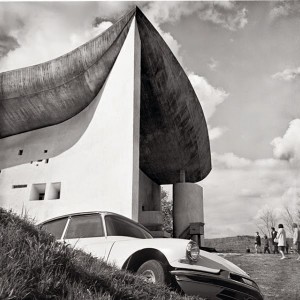 And then we also see Corbu himself appearing in the book. He was already an old crocodile in those days, with a huge palmares of stunning architectural realisations. He seems to avoid to look into the lens but, at the same time, he seems to be in the same jolly mood like all the others. 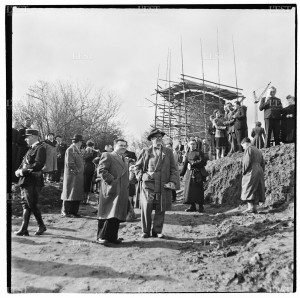 France was still in the process of recovery from the massive brutalities of the war. Many issues were not yet digested. Everyone was still trying to reposition himself in the new era. After finishing the chapel, Le Corbusier declared that he had created “a place of silence, prayers, peace and inner joy.” It seems that he was repositioning himself as well because today we know that the pre-war Le corbusier had embodied a much more sinister version of modernity. As an ambitious urbanist he had been more than charmed by the autoritarian political systems of Benito Mussolini and Adolf Hitler. In a recent publication on the subject we can read that he had been courting a whole galaxy of industrials, scientists and far right politicians with whom he was compromising himself in nationalist phantasms. He had been an outright anti-parlemantarist seeking the emergence of a “clean France” (read without jews, freemasons and decadents). The entrepreneurial Le Corbusier had imagined a new civilisation under the control of a corporative state; industrial and geometric cities from which the poor would be expulsed. 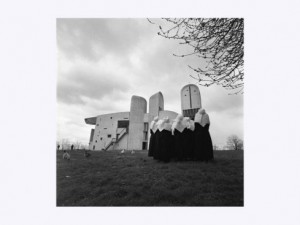 Modernity has many faces indeed.  All we want to say here is that this book reminds us of modernity’s spiritual and optimistic face. And it does so very well! The beautiful elegance by which the book is designed neatly converges with the idyllic and humane façade of Notre Dame du Haut.