The ninth publication by the Archive of Modern Conflict Books (AMC) is breathtaking! 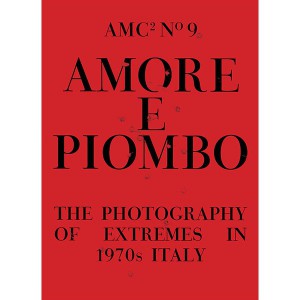 The publication is a selection of 110 high-contrast b&w tabloid photographs that were originally diffused in the press by the Rome based agency Team Editorial Services (TES). The series takes us back to the 1970’ies and is breathtaking because it proposes moments of glamour and violence as two extremes that are dancing with each other in quiet mysterious ways.

But the series is also breathtaking because of its beautiful and clever design by Melanie Mues. The insertion of quotes by Federico Fellini, Italo Calvino and Dario Fo into the sequence of pictures is a stroke of genious just like the choice of the red-orange-yellow colours of these pages. 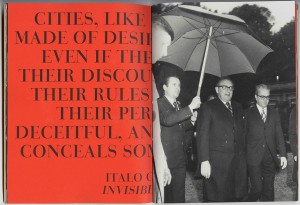 During the 1970’ies, Italy was reaching the point of no return in its definitive conversion from a pre-war economy to a new, global economy that is sustained by consumerist culture.

In the photographic testimonies of TES we can see how – in this new societal context – some major ideologies were coming to an end: the wrist watches of some far-left supporters seem to announce the end of socialism (p 22-23); women en route to a religious ceremony are holding their traditional attributes in an uncomfortable way (p 12); humble catholic nuns and their ecclesiastical authorities do not know how to look to paparazzi (p 51); the respectable jesuit father Bartolomeo Sorge looks like a samourai in high tech Japan (p 36). “The times are changing”. 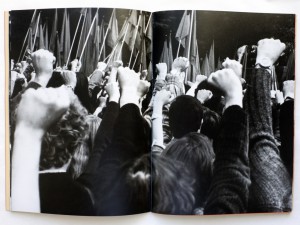 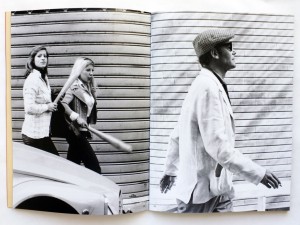 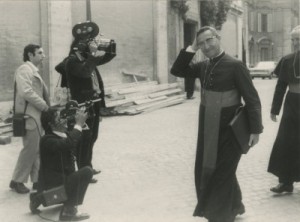 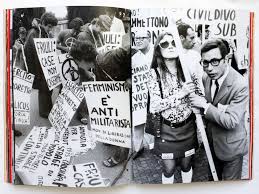 We also see how many new societal identities and archetypes are emerging: the so-called stars that are thriving in mass media. Many Italians seem to have been eager to adopt these new identities. 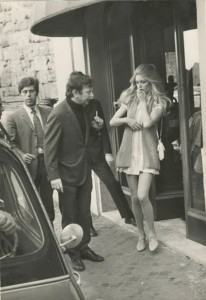 We also see many cars. Symbols of individual freedom where they are vehicles to access frenetic nightlife (p 16-17) ; symbols of private comfort where they function as a protective luxury cage for the shy empress of Iran (p 24); symbols of a violent society where they serve as vehicles for explosions (p 100), murder (p 115) or police (p 120-121) ….. 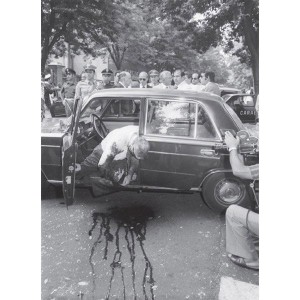 And here we are at the dark heart of the “Years of Lead” in Italy. The peninsula may have been on the verge of civil war with its ever changing government coalitions, the permanent occupations of universities and factories, terrorist attacks, theatrical assassinations which were all leading up to one traumatic climax: the kidnapping and subsequent murder of former prime minister Aldo Moro. 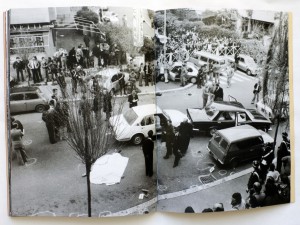 This tragic, ultra-violent and highly mediatised murder also constitutes the finale of Amore e Piombo. And all of a sudden the reader realizes that this book is more than an album of historical highlights. The photographs seem to be brought together into a rebus, a riddle in images, a graphic cryptogram sheding a subtle light on the dark and mysterious mechanisms behind the violence.

Was there any orchestration behind the violence? The authors of the book are writing: “There are no paper trails, just whispers in the deep shadows. Unseen hands certainly stirred the ingredients of the season – gnostic terrorism, conspiracy and collaboration – into the already toxic brew of perpetual coalition government, economic stagnation and industrial unrest as Europe’s fiercest and most radical working class movements took the streets“. But, ultimately the authors are also adding: “All the while, the true puppet-masters and string-pullers remain just out of frame“.

The Italo Calvino quote seems to me an important clue though. “Cities, like dreams, are made of desires and fears, even if the thread of their discourse is secret, their rules are absurd, their perspectives deceitful, and everything conceals something else“. 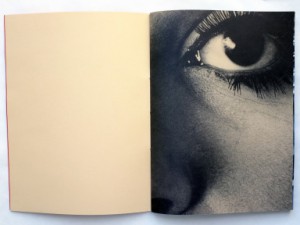 Throughout the book we witness the desires and fears of the Italian society. We see the absurd rules and the deceitful perspectives. We realize that everything conceals something else. And we want to understand the secret discourse. We want to catch the true puppet-masters and string-pullers.

The spread with the Calvino quote is ingeniously seperated between pages 26 and 111.  Maybe it is an important clue because ugh oh, who do we see each time on its opposite pages (pages 27 and 110)? It is Kissinger, the US secretary of state. A man with a mission?